Peony 'Pastel Splendor' is a Midseason single light pink to white Peony Itoh hybrid, white flowers showing shades of light pink and light yellow on opening, attractive center etched with brilliant red flares, good grower, attractive plant for in the garden (Roger Anderson / Bill Seidl, USA, 1996). The next message was posted on 15 March 2011 on the Peony Group by Bill Seidl: Peony Friends, I raised Pastel Splendor (Martha W x Saunders F2A) from Roger Anderson just-starting-to-root seeds in 1983. They began to bloom in my garden about 1988. I had not decided to register any until, about 1992, Roger Anderson, accompanied by a visitor to his garden, Don Smith, showed up in his garden and raved about how beautiful they all were. I didn't even have a garden name for any of them, so they began suggesting names, none accepted by me. So the best of the bunch was selected by me for naming and introduction. All the rest were discarded. The registration information is in the 1986-96 Check List, p19, with the date July 9, 1996. At that time it was well know in the Inner Sanctum of the APS that I could get pretty testy about an intersectional (i) hybrid being called an "Ito hybrid", so I left both terms out in my registation description. That's the way it appears in the published report, and nobody got their dander up. I gave proper credit to Roger for his part in the origination by listing his name first, followed by mine. I did that because, chronologically, he started the process. The same pattern appears in 'Pink Vanguard' (Seidl, Hollingsworth) and in 'Garden Sunshine" (Seidl, Rogers, R.) But this pattern does not tell just how much the first person named contributed to the plant's development. In the latter two cases, I did everything but register the plant. In the case of Pastel Splendor, Roger only supplied the seed. Valuable seed, true, but the least time-consuming part of the process. Most sites and lists give proper dual credit for origination. And there are some good photos of the flower. On the Scholten site, the carpel mass is very condensed, which I like. Likewise in the Klehm SSp list. The HPS gallery shows no multicarpy and a thin stamen ring. Some of the discarded siblings had larger, wide-spreading multiple carpels, really ugly. I believe I selected the best one, and it is very vigorous. It once produced a nice firm seed, but it never germinated. Bill Seidl 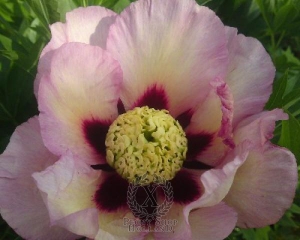 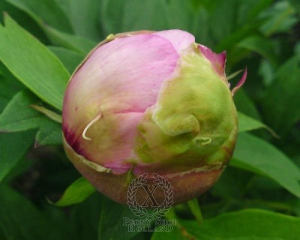 
Peony Pastel Splendor is one of the many special single light pink Itoh Hybrids that we grow at Peony Nursery Peony Shop Holland Intersectional peony hybrids, also known as Itoh hybrids, named in honor of Toichi Itoh, the originator of these unique hybrid peonies. They are representative of the progeny of crossing or hybridizing the two main groups or selections of peonies; the herbaceous hybrids which die down sub surface buds during their dormant season and the tree or woody shrub peonies which retain a year round woody branch structure above ground level. During their dormant season, the Itoh or Intersectional hybrids retain only extremely short (1"-2") woody stems above ground level. Ornamentally, they achieve the best of both parental worlds with the handsome flowers and foliage of the woody tree peonies displayed on an herbaceous plant, with annual new growth originating from buds below ground level. Strong healthy plants form attractive dense, neat rounded bushes which are shorter in stature than most tree peonies. Flowers are displayed above the handsome foliage that remains greener longer than their herbaceous parents. Intersectional hybrids are somewhat hardier than tree peonies and more tolerant of heat and humidity which extends their ornamental potential in both the North and south.

Peony Nursery Peony Shop Holland peonyshop.com in these days solely targets at expanding unique, exceptional prime quality peonies. It has not always been this way. The company has an unique history getting started in the year 1875 with the help of Simon Scholten that also was basically growing greens for an income.

During the year 2001 this firm built their very own modern marketing and advertising-title & logo design "Peonyshop.com" and as a result they started centering on expanding exclusive peonies. Within 2002 the particular corporation opened their very own on-line peonyshop together with Peonies & Buxus. Within the year 2003 Joshua Scholten started off on with multiplying peonies. After that in 2004 this particular institution began to export peonies out of the Netherlands all-around European countries, Usa plus Asian countries.

Right now our own peony nursery is focused on expanding and spreading special, top quality peony roots that happen to be distributed and exported to all over the world. Additionally we additionally reduce peonies mainly assisting the Dutch peony flower market place.

The fall is really the right period regarding seeding peonies. These peonies are usually unbelievably long-term-lived plants beeing alive close to 50 up to 70 yrs, so once an individual get them selected and planted in the right way, you definitely will have fun with the plants for years and years. Peonies have a preference for the bright spot together with a well-drained soil. A good air movement available the the peony plant is essential. These kinds of surroundings support these plants to avoid illness issues. To organize a seeding hole for the purpose of a bareroot peony, dig the soil into a depth around 12-18". Make use of a garden fork to release the sides of the planting hole as well. It's always very important and vital that the "eyes", or growing nodes, situated nearby the base of the old stem, end up no greater than Two inch beneath the dirt surface.