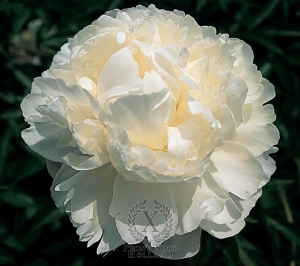 
Peony 'Moon over Barrington' is one of the many special huge White Peonies that we grow at Peony Nursery 'Peony Shop Holland'. Peonies have large, spectacular blooms in late spring to early summer. A favorite for cut flower bouquets, the Peony is an easily grown, long lived, deer resistant perennial. Shipped bare root from September to November.

Peony 'Moon over Barrington' have been breed by Roy Klehm of Song Sparrow, USA. History of Roy Klehm Song Sparrow Perennial Farm and Nursery; The Klehm Family and the horticulture industry share a long and storied history together. The relationship dates back to 1852 when John Adam Klehm immigrated from Germany to Arlington Heights, Illinois. There he started a nursery business, principally fruit trees. John had three sons: George, Charles & Henry. All became active in the nursery business. It was Charles Klehm who developed a love for flowers. He was a charter member of the American Peony Society formed in 1903. In 1916, he planted his first Peony fields where 'Emma Klehm' and 'Charlie's White' and many more varieties of Klehm Estate Peonies were hybridized, introduced and patented. In 1943, Charles Klehm formed a partnership with his son Carl under the name Charles Klehm & Son Nursery. The nursery moved from Arlington Heights to South Barrington, Illinois in the 1960s and operated until 2004 under the direction of one of Carl Klehm's sons, Roy Klehm. Roy has introduced many new plant varieties over the years including woody introductions as well as herbaceous plants, many of which are Daylilies, Peonies and Hosta. He has worked with breeders to introduce some of the best shade trees, Crabapples, Magnolias and Lilacs in the industry. Roy and his wife Sarah own and operate Klehm's Song Sparrow Farm in southern Wisconsin. Roy's brother, Arnold operates a wholesale orchid operation, Arnold J. Klehm Growers, in Hampshire, Illinois.

Peony farm Peony Shop Holland Peonyshop.com at this time specifically focuses on building unique, good best quality peonies. This hasn't been always the main case. This corporation comes with a rich back ground starting in the year 1875 together with Simon Scholten who also has been growing vegetables for money.

In the year 2001 the firm made up their unique modern marketing-name & brand "Peonyshop.com" and after that they began putting attention on expanding unique peonies. Throughout the year 2002 this business launched their very own world wide web peonyshop.com together with Peonies & Buxus. Within the year 2003 Joshua Scholten began with multiplying peonies. After that in year 2004 the particular corporation started to distribute peonies of the Netherlands all around Europe, Usa and also Asia.

Currently our own peony nursery is focused on maximizing and multiplying special, premium quality peony roots which have been distributed and exported to internationally. Furthermore we also cut peonies largely assisting the Dutch peony flower market place.

About growing Moon over Barrington a double white Peony flower

The fall season is usually the perfect time if you weigh in mind planting peonies. The peonies are actually extremely long-lived plants staying around approximately fifty up to seventy yrs, so soon after an individual have the particular peonies planted in the correct manner, an individual definitely will get pleasure from them for years. These plants like the bright area with a well-drained ground. A good air flow circulation presented around the the peony plant is also essential. These particular environments assist this type of plants to prevent sickness problems. To organize a seeding hole meant for a bare-root peony, dig the ground to the level of 12-18". Use a garden fork to release the sides of the particular planting hole as well. It is usually really important that the "eyes", or growing nodes, located near the bottom of the old stem, end up no greater than Two inch beneath the soil surface.